.  2) “…comparing initial claims today with the past is the proverbial apples to oranges. An important fact in looking at claims data is that vastly fewer people today are eligible for unemployment benefits. In other words, the number of unemployed people who can't receive jobless benefits – and thus are not in the initial claims data – has risen relative to those who have unemployment insurance.

.
Today, the ratio of those with unemployment insurance to the total number of unemployed is about 30 percent, which pretty much touches the lows so far in this economic recovery. That’s where the comparison with the level of claims in the 1970s – or perhaps any pre-crisis era – is misleading.

.
Let’s take a deeper look at the 1970s. Back then the level of continuing unemployment insurance claims was about 60 percent to 65 percent of the overall unemployment level. That ratio fell to the 40 percent to 45 percent range from the 1980s to 2002, then rose to more than 50 percent in 2009, but has since fallen to the current lows.

… Today we have more temporary workers, self-employed workers and contractors, many of whom are not eligible for unemployment insurance. … 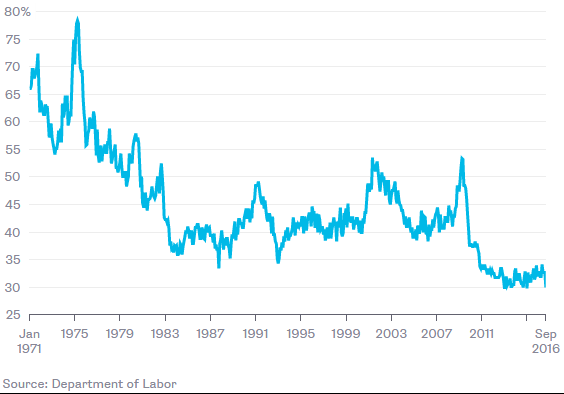