+
For many months before the date for which the Brussels Conference was originally fixed the Secretariat of the Economic and Financial Section of the League of Nations was preparing for the event. This Secretariat, consisting very largely of British officials with experience of the British Civil Service, worked in London, with HQ at 117 Piccadilly, and, without attempting to form or even to influence opinion, collected and edited what the correspondent of the Times plaintively referred to as documents with аn aggregate thickness of four inches.
The first of these documents to be published was the volume entitled Currencies after the War, which appeared in Јипе, 1920. Originally intended for the first meeting of the Assembly and prepared when that meeting was expected to take place in November, 1919, this bооk was ultimately used for the purposes of the Brussels Conference, and was circulated to the delegates who met in September, 1920. It had, indeed, already attracted attention in mапу parts of the world : it was very freely quoted, for example, in the Federal Reserve Board Bulletin…
+ 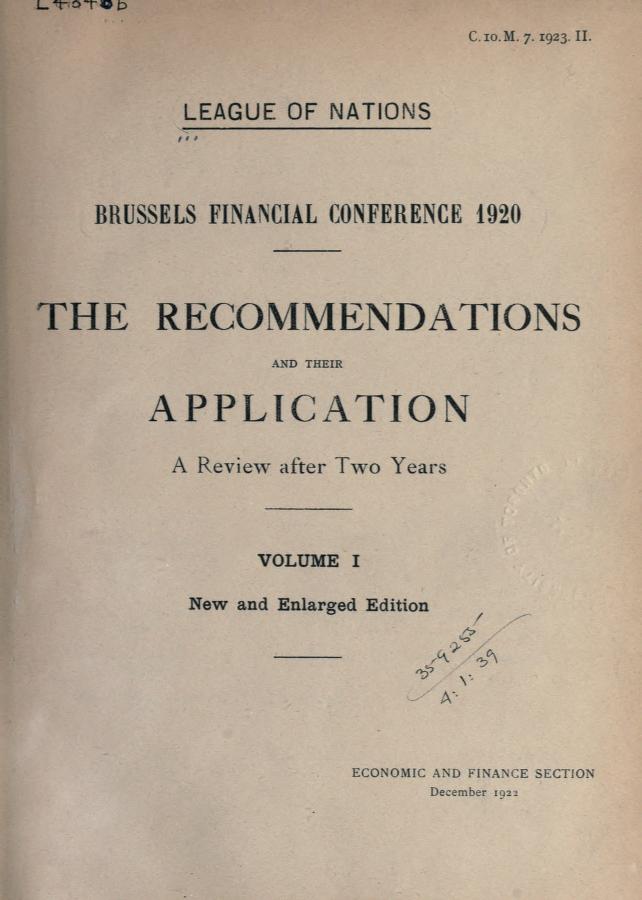 Delegates, although nominated by their governments, were to attend in their private capacities. This maneuver testified to the immensity of the task, from which governments desired some distance, but it also allowed for the attendance of delegates from nonmember countries, including the US.

In retrospect, it is easy to downplay the results of the Brussels Conference. With no substantive authority, the declarations of its expert groups were obviously hortatory. Nonetheless, the delegates reached a remarkably broad consensus on the principles appropriate for guiding national policies. The delegates appealed to governments to return to the internal policy goals of the prewar era. Governments should balance their budgets and restore credibility to their currencies by disinflating. “The country which accepts the policy of budget deficits,” the delegates collectively intoned in words that reverberate today, “is treading the slippery slope to general ruin; to escape from that path, no sacrifice is too great” (IFC, 1920, p. 10). Not so often heard today, however, is the corollary:
“To enable governments to give effect to the principle of sound finance, all classes of the community must contribute their share. All classes of the population and particularly the wealthy must be prepared willingly to accept the charges necessary to remedy the present situation. Fresh taxation must be imposed to meet the deficit” (IFC, 1920, p. 11–12).

The conference also called for а drastic reduction in expenditures on armaments, then still averaging 20 percent of national budgets. With regard to exchange rates, most histories of the conference have reported an appeal for а return to the gold standard. It is true that delegates cited the stability associated with а viable gold standard as representing an ideal to be achieved. They stated, however, that а return to the gold standard should not be attempted before countries were ready, before internal financial stability was established. *) The delegates made other recommendations, including one calling for the abolition of “artificial” restraints on trade. Finally, they requested the secretariat of the League to issue а report on the actual responses of governments to all of their recommendations.

*) Without a basis in “sound” domestic policies, “devaluation and deflation would be needed, but this could be disastrous. [We therefore] do not recommend any attempt to stabilize the value of gold and gravely doubt whether such an attempt could succeed. [I We believe further] that neither an international currency nor an international unit of account would serve any useful purpose or remove any of the difficulties from which international exchange suffers today” (IFC, 1920, p. 13).
…
But how was it viewed by contemporaries? As one close observer recalled twenty-five years after the Brussels Conference:
“The recommendations exercised a powerful influence on governments and expert opinion in the ensuing years; they were applied by the League in its various schemes for the financial reconstruction of individual countries; they also provided a standard of financial orthodoxy to which appeal was constantly made in the course of the subsequent painful and difficult process of restoring budgetary and currency stability and reopening the channels of international trade. This was the real achievement of the Conference” (Hill, 1945, p. 22).